259 Rhinos Have Been Poached During The First Six Months Of 2022; Poachers Are On The Move In South Africa

Sanparks recently announced that a total of 259 rhinos have been poached for their horns in South Africa during the first half of this year. Sadly, the demand for rhino horn remains a constant threat to the population of the endangered species. Crime syndicates are continuing to operate within South African borders.

According to Sanparks, what has changed are the locations of where the rhinos are being poached.

“Recent trends in rhino poaching show a move away from Kruger Park to private reserves and KwaZulu-Natal where the majority of rhinos have been killed this year. This makes it all the more important for the national government to shift its focus to supporting provincial authorities and private reserves in the war on rhino poaching” Minister of Forestry, Fisheries, and the Environment, Barbara Creecy, said in a statement.

The number of rhinos poached between January and June 2022 is 10 more than the 249 poached countrywide in the first six months of 2021. From January to the end of June 2022, 82 rhinos were poached for their horns in Kruger National Park.

Poaching statistics for this year so far reflect a loss of 210 rhinos on state properties and 49 rhinos in privately-owned parks. As indicated, the hardest hit during this period is KwaZulu-Natal which recorded a loss of 133 rhino. This is more than triple the 33 rhino killed in the first six months of 2021.

On a positive note, however, the number of arrests and prosecutions recorded over the past six months can be attributed to the continued successful collaboration between law enforcement agencies, including SAPS and DPCI, customs officials, and the National Prosecuting Authority. These efforts are supported by private security. 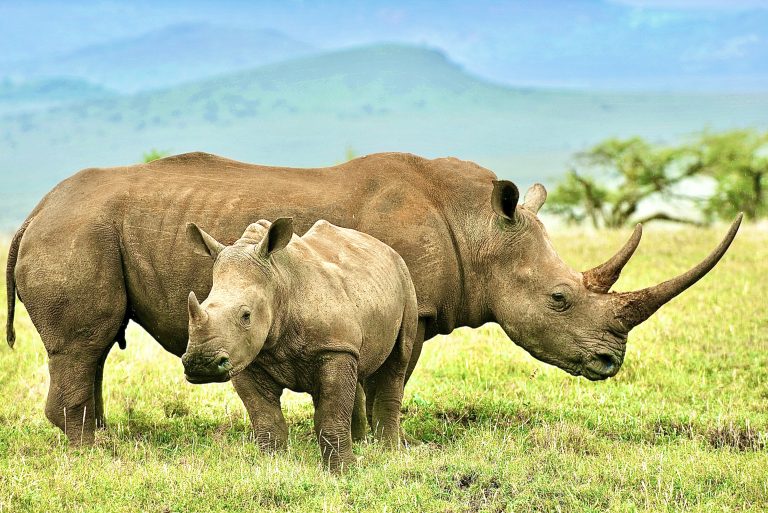 Partnerships between the public and private sectors remain key to combating wildlife trafficking. In addition to work being undertaken within the seven Integrated Wildlife Zones, the partnership now includes both the financial and transport sectors, as well as transit and end-user countries in Southeast Asia, especially with the People’s Republic of China, Malaysia, and Vietnam.

Between January and June of this year, 69 people were arrested in connection with rhino poaching and rhino horn trafficking. Of these, 13 alleged poachers were arrested in Kruger National Park.

As a result of the ongoing work of integrated enforcement teams at OR Tambo International Airport, four alleged rhino horn traffickers were arrested between January and June of this year for trying to smuggle 56 pieces of rhino horn out of the country. In one instance, cooperation between Hawks, Malaysia, and Qatar authorities resulted in the arrest of another alleged rhino horn trafficker and his haul of rhino horn pieces at Doha Airport in Qatar. This arrest demonstrates the success of country-to-country cooperation to combat wildlife trafficking at an international level.

The Hawks are also working with the U.S. Fish and Wildlife Service in an investigation arising from the discovery in June of a suspect parcel at FedEx that was destined for the U.S. The parcel contained eight kilograms of rhino horn pieces concealed as wooden art pieces.

A number of search and seizure operations took place countrywide, with the Hawks arresting one suspect and confiscating 29 rhino horns during an operation at storage and packing facilities in Bedfordview. The suburb of South Africa is where rhino horns are prepared and packed for the illegal markets in Southeast Asia.

In combined law enforcement operations, two suspects were arrested in June when they were stopped by the Highway Patrol in Bedfordview and found to be in possession of two fresh rhino horns. Two suspects, one an ex-Ezemvelo-KZN Parks ranger, were arrested earlier this month after their vehicle was searched and two fresh rhino horns were seized. One of the accused had previously been arrested for possession of rhino horns in Kruger National Park.

On April 23rd, an integrated operation was conducted to address money laundering and corruption linked to rhino horn trafficking activities within Kruger National Park. Various search and seizure warrants were authorized and executed at multiple premises in and around the Park with the aim of effectively dismantling the operations of some of the main targets. A multi-dimensional team led by the Hawks, with the support of Kruger National Park and Stock Theft and Endangered Species in Skukuza was assembled and premises in Limpopo and Mpumalanga were searched during the operation.

Three suspects were arrested which included two Kruger National Park field rangers. The arrests and the success of this operation had a significant impact on the rhino poaching activities within Kruger National Park and have sent out a strong message that corrupt and illegal activities will not be tolerated. One of the rangers was dismissed during the departmental hearing on July 21st. The other ranger’s departmental hearing is ongoing pending the outcome of the court process.

In total, 51 cases in which 51 people were convicted have been finalized. The heaviest sentence handed down was 34 years imprisonment, while two Mpumalanga men were sentenced to 28 years behind bars for killing rhinos and being in possession of illegal firearms and ammunition.

The global money laundering and terrorist financing watchdog group Financial Action Task Force (FATF), completed an assessment in 2019 of the threats posed to South Africa, and the efforts being made to fight these illegal crimes. During this process, the contribution of wildlife trafficking was found to present a medium to high risk to the country.

Responding to the recommendations of FATF, earlier this year, the National Prosecuting Authority obtained its first conviction on stand-alone charges in terms of Section 6 of the Prevention of Organized Crime Act (money laundering). In this matter, the individual was accused of laundering the money through a casino to buy rhino horn. Ping Wu was sentenced to five years imprisonment. The success of this prosecution demonstrates the importance of the government’s integrated approach to combat rhino horn trafficking, with an increased focus on targeting the financial crimes involved.

“Following the murder earlier this week of well-known anti-poaching field Ranger, Anton Mzimba, at his home in Timbavati, we are reminded of the threats that rangers face from poachers and their crime bosses on a daily basis. These are men and women that deserve our respect and support as we join hands to improve their safety,” shared the Minister at the time.

In May, Kruger National Park field ranger and dog handler, Shando Mathebula, was killed by a buffalo while on patrol in the Shangoni Ranger Section. He has been remembered by his family and colleagues as a young man who was dedicated and who served with discipline and distinction.

In recent years, the work of rangers has changed from a general focus on the conservation of species, to a more militant way of operating against well-armed criminal gangs entering national parks and private and state-owned conservation areas, to poaching rhino, elephant, and other species. Rangers often spend weeks away from home, living in the bush in an effort to protect the country’s natural environment from plunder.

“Our rangers need all the support we can provide them. These are men and women who, despite numerous challenges, remain committed to the task at hand despite not knowing what a day will bring,” concluded the Minister.