GUARDIANS OF THE WILD: DISCOVER THE ROLE OF PANGOLINS IN THE ECOSYSTEM AND TAKE ACTION TO SAFEGUARD THEM

“Guardians of the Wild” is the name of CHANGE and WildAid’s most recent pangolin conservation campaign, which seek to enhance public awareness of pangolins’ role in the ecosystem and thereby safeguard this endangered species from poaching and illegal trading.

Following the success of previous campaigns that have made a great impression on the young generation, CHANGE and WildAid announced the animation “Guardians of the Wild” in June 2022, calling on the community to join hands to safeguard wildlife. This is the main communication product of Guardians of the Wild campaign – a creative communication campaign aimed at raising public’s awareness about the four species of Asian pangolins as well as their unique skills and eco-beneficial roles are based on an innate talent: providing ‘pest’ control. 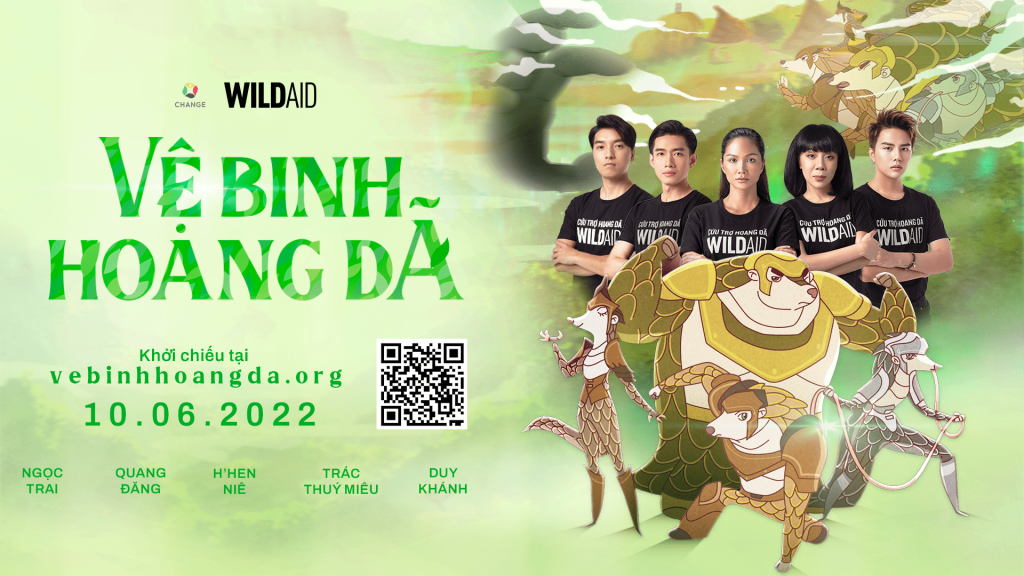 Pangolins play an important ecological role, providing ‘pest’ control and improving soil quality. Their large and elongated claws enable them to burrow underground for shelter and to excavate ant and termite nests for food. A single pangolin can consume up to 191,780 insects – ants and termites/day (over 70 million a year). Researchers at Ohio State University claim billions of dollars are spent annually on repairing termite damage and treating and preventing infestations. Meanwhile, healthy populations of scaly anteaters throughout their historic range can help to alleviate these problems.

The animation “The Guardians Of The Wild,” which was inspired by superhero stories to fight tyranny, features four guardian characters who defend the forest and the village of Pango from an invasion of millions of termite armies. The four pangolin guards in the narrative are anthropomorphic representations of four Asian pangolin species: the Javan pangolin, the Philippine pangolin, the golden pangolin, and the Indian pangolin. Viewers will be led into unexpected, amusing, and profound situations, with a radically different ending than most superhero films. Even as wild heroes, they can’t defend themselves from humans, as the storyline helps the viewers comprehend.

Visualize pangolins as guardians with numerous skills to defend themselves and their companions, as well as to assist the living environment and ecosystems on Earth, using a new expression. The campaign aims to educate the audience about pangolins and their importance to biodiversity, demonstrating the value of conserving and saving pangolins from poaching and trafficking.

Top 5 Miss Universe H’Hen Niê, Actor Duy Khanh, Choreographer – dancer Quang Dang, and MC – journalist Trac Thuy Mieu are among the Goodwill Ambassadors who participate in the animation “Guardians of the Wild,” representing the characters in the guard team. Besides, the animation is also voiced over by actor Ngoc Trai. Images of the ambassadors who are part of the current Wild Guard campaign may be seen on social media and on LCD displays at shopping malls, offices, and restaurants. To disseminate information about pangolins and campaign themes to the general population, media outlets such as posters and banners were used.

With this creative communication campaign on pangolin conservation, CHANGE and WildAid are looking forward to an engagement from the community. Come along and join us!