On 11th November in Que Phong district the government captured Pham Dinh Dung (54, of Tien Phong commune) while using his car to deliver 8 squirrels and 1 muntjac (Chi Mang), weighing 8kg in total. All of the animals were dead. He bought the animals from a Thong Thu local commune, which cost 7,5 million, to serve in a wedding. 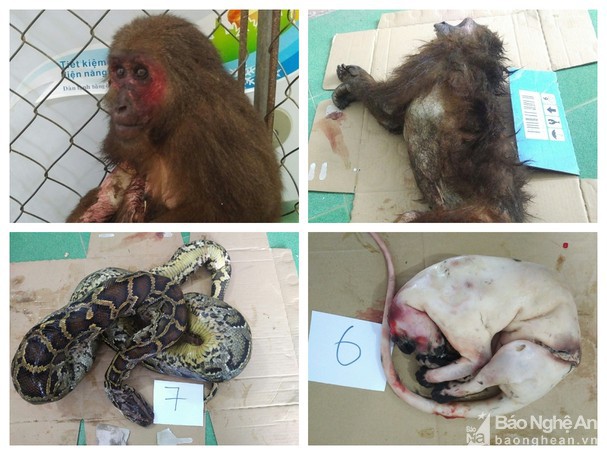 These are just 2 examples from many other wildlife purchasing cases that were captured by the authorities recently. They are just the tip of the iceberg however and the wildlife purchasing situation is becoming more and more sophisticated, especially when social media takes a role in it. Just go on Facebook and type “wildlife purchasing”, you can easily find over a thousand public and private groups. Many of them have thousands of members, publicly trading wildlife animals and to bypass the inspection from law enforcement, they simply use the word “preserve” instead of the word “sell/buy”.

According to Education for Nature – Vietnam (ENV), the Wildlife Protection Department have recorded more than 2,400 cases of wild animals being advertised on Facebook, YouTube, Zalo, Tiktok and other online platforms with hundreds of detected cases every month.

It is easy for those doing the exploiting to reach customers and hide their identity via social media, with many people advertising products made from wildlife such as rhino horn, ivory, bear claw, tiger skin, etc. People purchasing wildlife also use various tricks to bypass the inspection from law enforcement.

Moreover, crime chains and international criminal gangs are established and organised with sophisticated methods, increasing scale, and complex mechanisms for purchasing and transportation.

In the transportation process, these gangs will hide wild animals in containers (which are unlikely to be inspected by customs) and are mixed with bulky products such as wood or food. They use documents to appear legal making use of files proving the origin of the wild animals or products made from wild animals; they use technology with specific trading codes; and use transportation with false number plates or official state vehicles, etc. These schemes are hard to detect.

To handle the escalation of this problem, the People’s Committee of Nghe An Province issued Plan 504/KH-UBND to implement Directive No. 29/CT-TTg of the Prime Minister on some urgent solutions for wildlife management. The Directive defines it as a regular mission ensuring the success of wildlife conservation and sustainable development of wildlife species.

Accordingly, to ensure the strict implementation of the law on wildlife management, the Directive requests: to stop the import of wild animals, whether alive or dead; eggs, spawn or ova, larvae, parts and derivatives thereof (except aquatic animal species used for production and processing of food or livestock feed already announced by law; parts of wild animals processed for use as pharmaceutical materials or production materials or into finished products). Ministries shall, within the scope of their functions and competence, review relevant legal documents to propose competent authorities to revise or add sanctions; to resolutely eliminate marketplaces and places for illegal trade of wild animals; to strictly control and handle acts of illegal hunting, catching, trading and transporting of wild animals etc.

The document also urges officials, State employees to abolish wildlife markets or trading sites, keep tight management of and strictly handle acts of illegally poaching, buying, selling, transporting, slaughtering, consuming, storing, advertising and abusing wildlife, especially animal, bird and reptile species in the natural environment. Besides, the PM instructs ministries and local authorities to enhance their supervision of the raising of wildlife, and intensify the fight against violations of wildlife-related regulations and laws.

Each year Nghe An alone has discovered dozens of wildlife purchasing cases, with more than a hundred individuals seized. If this situation continues, it won’t be long before all the rare species expected to disappear in the Red list shall be gone for certain.

This is not only a concern in terms of wildlife conservation, increasing wildlife purchasing has left many frightening outcomes for humans because of the hidden bacteria and parasites in the animals, causing unpredictable illness. Many people have endured serious infection even death due to many deadly bacteria hidden in animals.
Vietnam had to suffer serious economic losses when it destroyed 5 million infected pigs, with the source believed to originate from wild pigs in Africa. African swine fever virus is still a long-term threat to the domestic livestock industry.