Using intelligence analysis to save tigers in Southeast Asia

With less than 3,900 tigers left in the wild, we need to focus on more impactful ways to tackle the trafficking of tiger parts and products. Investigating and analysing the convergence of wildlife crime with other forms of serious and organised crime can offer a strategic upper hand in the fight for wildlife justice.

This International Tiger Day, these incredible animals are in a more precarious situation than ever before. Shrinking habitats and sustained trafficking have ensured that tigers are listed as “Endangered” on the IUCN Red List; fewer than 3,900 tigers remain in the wild. Wild tigers are already extinct in China, Vietnam, and Lao PDR. Populations are drastically reduced in Myanmar and Malaysia, with less than 200 Malayan tigers thought to remain in the wild. The loss of this apex predator will have wide-reaching, negative effects on the surrounding ecosystem. Despite this imminent threat of extinction, the demand for tiger products remains high, particularly in Vietnam. Trafficking across Asia continues apace, with tiger teeth and claws eagerly sought for use in jewellery. 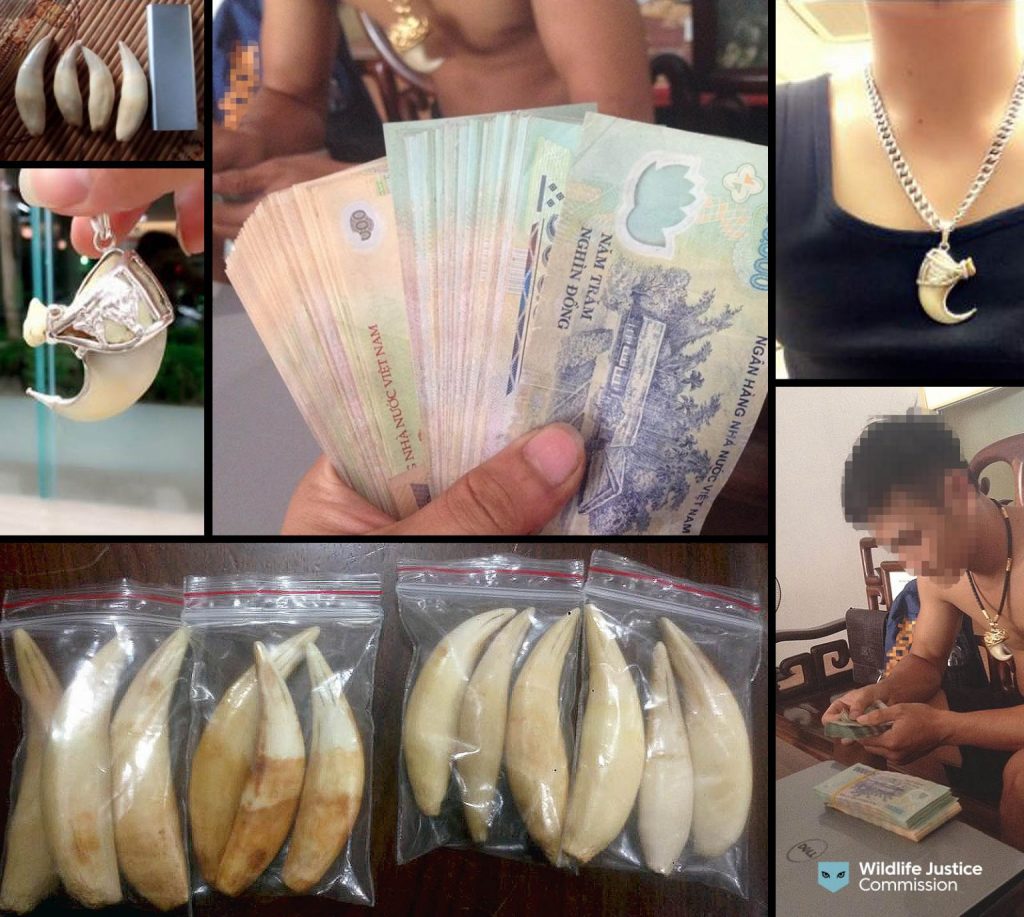 Over the last four years, tiger canines offered to undercover Wildlife Justice Commission operatives have ranged from USD 300 – 3,000 on the Vietnam and Lao PDR markets, with an average price of USD 1,500.

Many factors can affect the price, such as the surrounding encasing of the canine, the size of the tooth, the number of products the buyer wishes to purchase, and transportation of the goods. Many of the traders our teams engaged with offered delivery to China as part of the service.

The Malayan tiger is usually targeted with intent to supply the demand for its parts. Over the past 70 years, Malaysia’s population of wild tigers has drastically decreased by more than 93%. 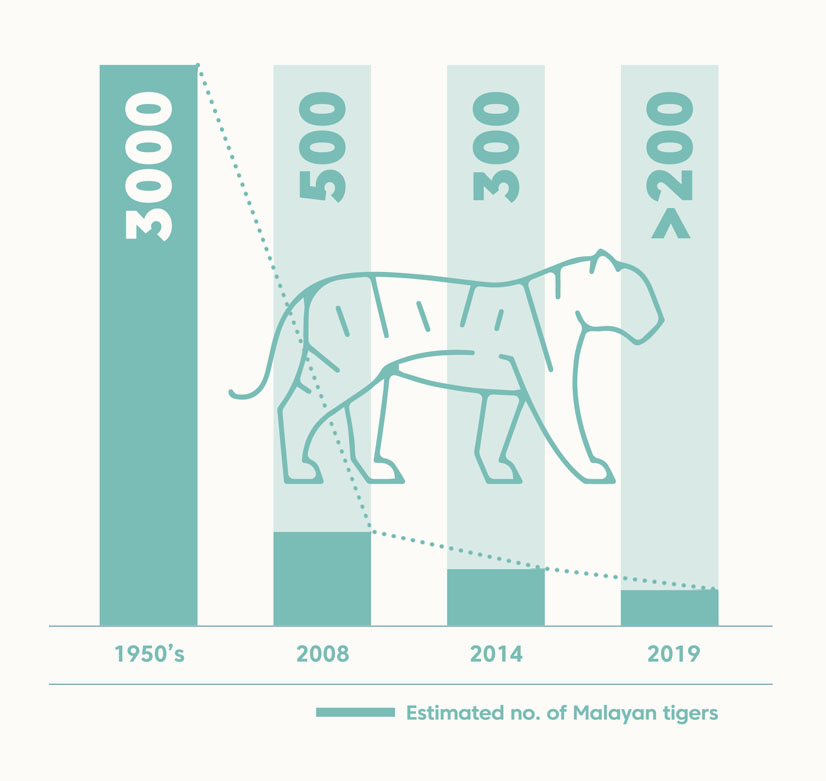 This gravely fragmented population is under more pressure than ever. Law enforcement agencies and conservationists are doing their best to hold back the tide, but with such a vulnerable subspecies, every individual tiger lost is bitterly felt. Since 2016, 18 seizures of tigers or tiger products in Malaysia have been reported:

It is estimated that the tiger parts seized in Malaysia since 2016 belonged to a minimum of 19 tigers, which represents around 10% of the estimated tiger population remaining in the wild there. The sustained demand for tiger canines corresponds with increased threats to the Malayan tiger. The Malaysian Department of Wildlife and National Parks (DWNP) states that between 2016 and 2019, a total of 134 “conflicts” occurred between humans and tigers.

How are they being poached?

A cruel and indiscriminate method, tiger poaching in Malaysia is often conducted with the use of snares. Snares are cheap, effective, easy to make – and entirely unselective, capturing and devastating wildlife populations all over Southeast Asia. Between 2014 and 2019 alone, rangers in Malaysia’s Royal Belum State Park and Temengor Forest Reserve found and removed 1,272 snares. 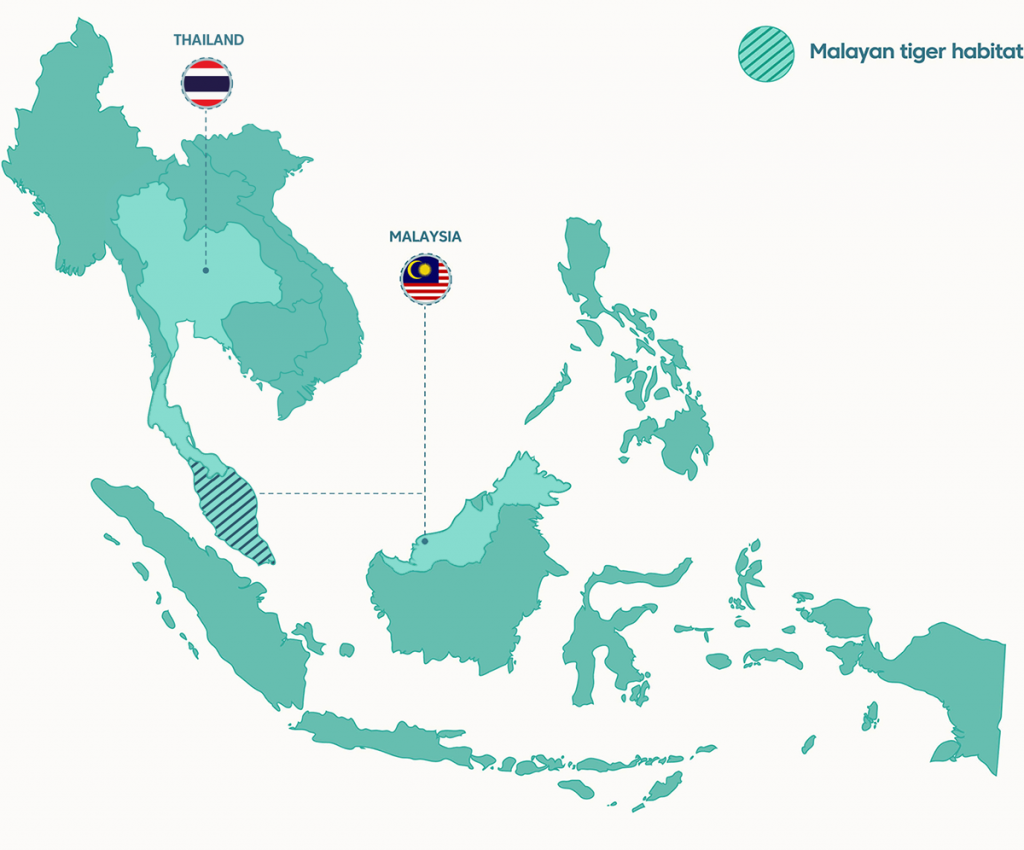 There is, at least, a positive trend to report on this front. Since 2017, the capacity of ranger teams in these areas has been increased. In 2020, a total of 15 patrol teams in the Belum-Temengor Forest Complex recovered 38 snares, only seven of which were active. The Wildlife Justice Commission also works to support World Wildlife Fund Malaysia (WWF-Malaysia) to tackle such tiger-related criminality in the region. WWF-Malaysia has monitored an additional 11,000 km of the forest complex per year since 2019. These measures have combined to create an impressive 98% decrease in snaring in the area since 2017.

While law enforcement and non-governmental agencies within Southeast Asia are working to step up their fight against wildlife crime, it remains an appealing source of income for transnational, organised crime networks. This is clearly demonstrated by a case study shared in our recently published report on crime convergence.

In this case, the Wildlife Justice Commission was gathering intelligence on a syndicate trafficking Malaysian tiger products. This crime syndicate was also involved in human trafficking, bringing Vietnamese women into Malaysia to work in the sex industry.

This network, run by a Cambodian boss, brought Vietnamese nationals into Malaysia to illegally collect agarwood, at least seven were victims of trafficking. These individuals would opportunistically poach tigers and other wildlife products to earn extra money. Acting on information received from the Wildlife Justice Commission, Malaysian law enforcement arrested the suspects and seized tiger, bear, and ivory products.

Similar criminality was seen again earlier this month, when four Malaysians, two Cambodians and a Vietnamese national were arrested in an operation by the Malaysia’s Department of Wildlife and National Parks (PERHILITAN). Law enforcement agents seized tiger products and other illicit wildlife products during the operation. One of the arrested persons is a suspected high-level wildlife criminal, associated with hunting elephants, tigers and other wildlife. “The arrest enabled the department to solve several cases involving elephant hunters in the past three years,” said PERHILITAN Director-General Datuk Abdul Kadir Abu Hashim.

In both cases, tiger parts and products were recovered during the operations. Such cases demonstrate that tiger poaching and trafficking often does not happen in isolation: wildlife crime is a transnational, cross-cutting criminal activity. International criminals remain attracted to the profit potential of wildlife crime, and crime convergence is an increasingly common issue as networks seek to “diversify” their criminal portfolios.

Crime is heavily reliant on connectivity. Intelligence analysis is an essential tool to identify where convergence exists and to strategically manage the highest threat from organised crime. It is a valuable force multiplier and must form part of any overarching strategy to tackle wildlife crime. By utilising intelligence analysis to inform our understanding of connections across crime types, we can create multiple pathways to tackle wildlife crime.

Wildlife crime can also be an easier entry point to investigate other associated crimes, and the use of wildlife legislation in some countries can provide additional law enforcement opportunities, such as the ability to act without a warrant, and to inspect premises at any time.

Multi-agency investigations and task forces are a powerful strategy to address convergence, offering alternative legislation, powers, and expertise to use the fullest extent of the law in pursuit of justice.

It takes a network to defeat a network

In both cases mentioned above, alliances between public and private organisations, governmental and non-governmental, were at the heart of the successful patrols, arrests and seizures. This is something we plan to build on significantly in the coming years as an organisation.

In addition to our work gathering, analysing, and sharing actionable intelligence, we are also embarking on a three-year project specifically designed to build and strengthen intelligence capacity to fight wildlife crime in protected areas of Southeast Asia. This ambitious undertaking has been made possible thanks to a generous EUR 1.9 million grant awarded by the Dutch Postcode Lottery (Nationale Postcode Loterij).

The project will create a global wildlife crime intelligence unit to help save species from extinction in Southeast Asia. Wildlife crime is a grave threat, not only to our planet’s biodiversity, but also to global security and public health. This grant – made possible by money raised by Dutch Postcode Lottery players – will enable us to provide strategic support to law enforcement agencies and other stakeholders crucial in safeguarding protected landscapes and wildlife in Southeast Asia. By working together, we will strengthen their capacity to conduct intelligence analysis and create a global intelligence picture of wildlife crime. Not only will this provide timely and tactical guidance to law enforcement, but it can also inform the fight against wildlife crime at strategic decision-making level.

For the sake of tigers, and ourselves, we must take every opportunity to address these issues before it is too late.