Cu Lao Cham Marine Park of Quang Nam province is known as a global Biosphere Reserve by UNESCO with 70% biodiversity jungle full of different species and plants. Despite that, the poaching rate in this special-use forest is increasing alarmingly.

The management board of Cham Island has been coordinating with Tan Hiep Commune The People’s Committee, Rangers force and locals to study biodiversity and patrol the reserve. While patrolling, they found many signs of snared and poaching wild animals in special-use forests. 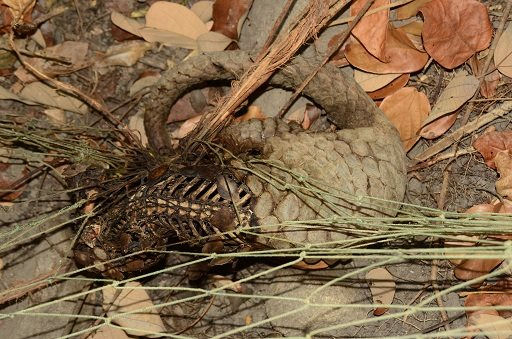 Poaching wild animals has been ongoing for a long time with many complicated snares made from wire, nylon, or rope. All of the snares are located within ravines, Bai Bim lake, North-West Hòn Lao island, area behind the island, and the forest behind Bai Huong village. The authority had detected and removed a 25-meter long snare route, but sadly a pangolin was found dead at the North of the island. Pangolins are stated in Appendix II of CITES treaty about protecting endangered plants and animals and listed endangered in IUCN Red List (International Union for Conservation of Nature Red List of Threatened Species).

Many suspects use guns to capture birds, wild mammals and reptiles such as python, snake, lizard, gekko, even monkey. They also use electricity to catch fish at Bai Bim lake.

Recently, there has been a trend among the locals to exploit and purchase Binh Voi (Stephania Glabra) as a houseplant, though it was listed as rare in IUCN Red List. Moreover, a large number of dog houses of island construction units have been placed in the forest allowing the dogs to hunt, chase and threaten wild animals.

In order to handle this current situation, the management board of Cham Island requests the locals, tourists, the construction units and their workers not to cut, burn down trees; not to bring flammable goods; not to exploit trees; and not to trade, store, poach or consume wild animals. Any violations should be immediately reported to the local authority, Cu Lao Cham Ranger base or specialized department.