During our journey of writing the articles, what haunted the reporters most were the images of monkeys and langurs being hunted, captured, decapitated, gutted, dried, bundled and sold to customers.

Those haunting images were recorded by the reporters in the border region between Ha Tinh and Quang Binh province in the Central Region.

Haunted by dried monkey and langur corpses in the border region

Reporters of the Journal for Forest and Environmental Protection www.baovemoitruong.org.vn have heard a lot from hunters and other ignorant people about the miraculous healing effects of monkey brains, which lead to their killing.

However, we have never witnessed the slaughter scenes of individual monkeys and langurs, who had their skulls cut wide open and eaten alive. It was extremely terrifying.

From being an acquaintance on social networks in Huong Khe district, Ha Tinh province, after many transactions of antique items that local people accidentally unearthed, D invited us to his house and then visited the forest to enjoy the products of his homeland. Accepting the invitation and driving to D’s house according to his instructions, we arrived at the house where D lived with his wife and two children, in the middle of a flower garden 50km from the Ho Chi Minh trail. Around the house, D displayed many items of crockery, porcelain, and antique bronze.

In addition, D raised a wildcat bought from the indigenous population. D said: “They hunt many wild animals here. In the communes near the border with Lao, they sell lots of monkeys, langurs, deers, and even great hornbills, or oriental pied hornbills with a beak length of 30cm.”

When we exclaimed surprisingly “there is not such a thing”, D immediately opened the glass closet and took out a dried great hornbill head cut from the neck. I used my hand to test the length of the beak, which was more than 30cm. The great hornbill is an extremely rare species. Holding a great hornbill beak in his hand, D revealed: “We have sold hundreds of beaks like this across the country.”

After lunch, D invited us to the neighboring houses to scout monkeys and langurs. If the price was appropriate, they would be bought to cook bone glue. We traveled 30km from D’s house, crossing through construction roads that were extremely difficult to pass by in the Vietnam-Laos border region. We arrived at a restaurant named K.H near the center of Huong Lam commune.

Upon arrival, two women brought dozens of squirrels recently captured in the forest by their husbands to sell to the restaurant owner. While the owner was counting money to pay for the squirrels, two women riding a CUP arrived at the door, taking out from their basket a hare and a beheaded bird which they claimed to be a recently captured great hornbill or oriental pied hornbill. The head was sold separately due to its high price. However, the owner said: “You take them home. Bring me the head in the afternoon, and I will buy them all.” According to our rough estimate, the wingspan of the black beheaded one reached 1 meter. The great hornbill flew straight out of legendaries (as this bird was extremely rare), with a beak weighing 11% of the total body weight and a wingspan reaching up to 1,6m.

Now, inside the restaurant, Ms. K had gone to the neighbor’s house (which sent over bushmeat) and returned with a canvass containing something round and as hard as a rock. Waving her hands to invite us into the kitchen, Ms. K turned the bag upside down, which made 3 monkey and langur heads fall down onto the floor. As K. shook the bag more vigorously, lots of bodies of monkey/langurs were revealed, with the long arms of langurs sticking out like human corpses, which deeply terrified us. Even more, Ms. K brought out a basket of wild boar meat, dried deer meat, and a tray of recently cooked monkey bone glue. 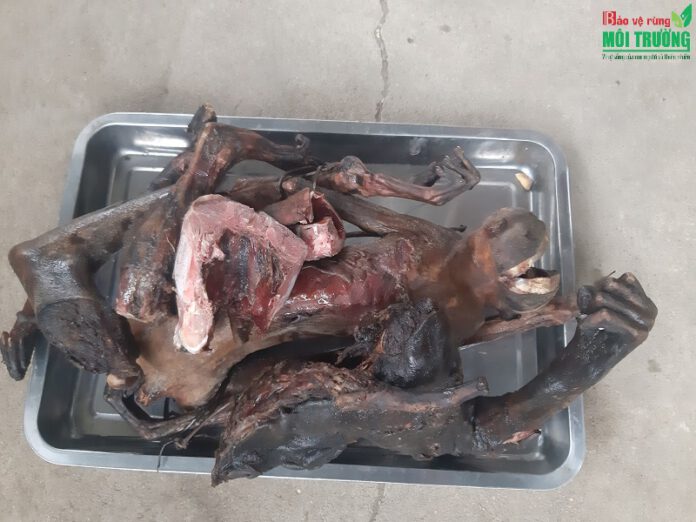 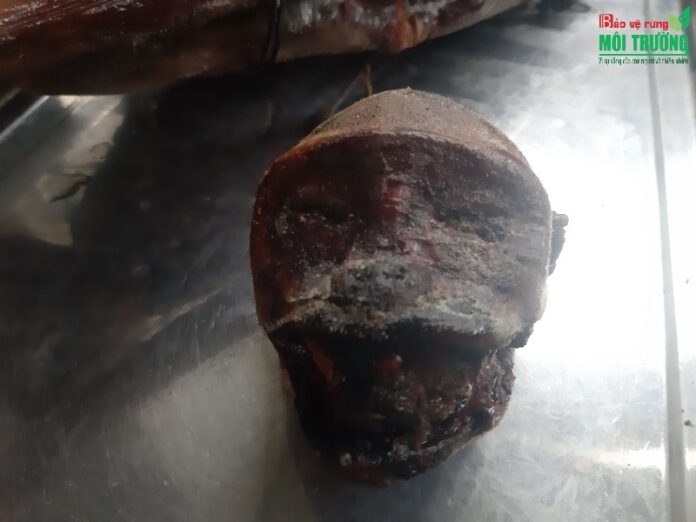 Mr. H, Ms. K’s husband, quickly pulled us to the fridge and took out bags of chopped pieces of red meat with white skins, revealing: “This is monkey meat prepared for young people to eat and drink tonight while watching football.” Monkeys and langurs’ skulls had their teeth bared, their eyes rolled, or even their skulls split in half. The owner began to brag about the dish of eating monkey/langur brains while the animal was still alive and clasping their hands to beg for mercy.

Afterward, the husband and wife advertised the price and origin of the goods, which ensured good quality. Large quantities were also available. Then, they told the story of how they kept wild animals divided into many neighbor houses so that if caught, they would not be prosecuted or imprisoned due to the small quantities of goods in their possession. They even bragged about having connections with many officers in governmental departments, commune officials, and many lifelong connections within and outside the province. Only until late in the evening, when we left for reasons that we were afraid that the goods were preserved in chemicals when hunted in the forest, did the husband and wife take the “goods” to their neighbor’s house, sounding unhappy.

From Ha Tinh, the reporters continued our journey southwards after receiving information about “goods” through connections on social media. Along the way to Trooc Town, Quang Binh province, we met a person who had advertised the sale of bear bone glue and bear claws online. Traveling from the center of Dong Hong in Quang Binh province to Quan Hau town, Quang Ninh province, we met our “virtual friends” to see tiger skins, tiger claws, bear limbs,… displayed publicly.

However, after digging for information, we knew that the people we met were not professional “forest goods” traders. They only sold when the goods were available to make a profit. Ignoring close friends who we had known for a long time but had never met, we continued to move to Quang Tri province, where a “female boss” in forest goods with a 5-year reputation stayed in Lao Bao border gate (Huong Hoa).

Through social media, we researched this woman thoroughly. Via phone calls, we learned that her name was Nguyen Thi L. She lived near Khe Sanh town and was famous for being a “forest goods” female boss. There were always several freezers full of wild animals in her house. She even invested in a large freezer for the surrounding hunters to preserve forest goods in her house. It was worth mentioning that during her 5 years trading wild animals, she had sold her goods on National Highway 9, near a customs station, without getting caught. Nevertheless, according to L, some of her friends in Khe Sanh town were arrested and prosecuted for hundreds of millions of VND on grounds of selling pangolins and salamanders.

When we arrived at the place, everything was the same as the “female boss” had advertised. On the signboard of the grocery store, which wrote “Here sells wild boar and wild chicken”, was L’s phone number. L’s address was Tan Hop commune, Huong Hoa district.

When we arrived at the grocery store, L. was displaying a 3kg civet, a 4kg Asiatic brush-tailed porcupine, and many Rhizomyinae, all of which she claimed to be recently captured from the forest. Seeing a social media acquaintance traveling 700 km from Hanoi to the Vietnam-Laos border region in Quang Tri province to check the forest goods, L. trusted us completely, inviting us to inspect dozens of forest goods freezers. L took out from the fridges stiff frozen animals lying curled up or bloody deer thighs. Wild boar meat, wild porcupines, civets, and Asiatic brush-tailed porcupines all piled up in the freezers.

When asked about live animals, L said: “We also sell live animals and make a profit of dozens of millions of VND from the wildlife trade. Yesterday, we just sent 5 deers to Hai Phong. The day before, we delivered a serow to Hanoi through a passenger car. Big cities like Hanoi, Haiphong, Danang, and Ho Chi Minh city buy from me frequently. I will send the animals to whoever is interested via trucks and passenger cars. Money will be transferred.”

“As for restaurants and pubs nearby in the province, they will contact me if they need any animals. I will send them pictures and the bushmeat will be delivered via trucks upon making an agreement. Here at the border gate, trucks are always passing by. Any customers who want to eat fresh meat will notify me 2 days in advance, as I cannot provide fresh meat for them in just 1 day. If you don’t believe me, you can come to QH restaurant in Lao Bao district and NT restaurant in Cam Lo district, where I am the main supplier.”

Following L’s instructions, we went to QH restaurant in the border town Lao Bao and NT restaurant in Cam Lo district. Unsurprisingly, we witnessed forest goods being sold, as Ms. L had informed us.

Like every other trafficker that our group had met, L boasted: “Thanks to my personal connections, I can sell my goods here and advertise them on the internet without fears of repercussions. Many of my customers are teachers or even government officials, which makes it easy for me to operate. If you want to buy something, just pay me in advance. I will not fool you, don’t worry. The money is too little for me to care about as I often do business that is worth billions of VND.”

It must be emphasized that whether what Ms. L says is true or not is up to the authorities to decide. But the truth remains that the sale of live and frozen animals is widespread from the virtual world to real life. All the freezers containing forest goods and all the restaurants importing wild animals have all been verified and recorded. However, the fact that the illegal action of Ms. L has persisted for so many years without being prosecuted remains an unsolved question which needs a transparent answer from the authorities in Quang Tri province!

Last part: Stronger regulations must be in place to deal with illegal wildlife trade!